Are We Inter-Connected or All One? A Look at What We Think We Know

Most of us think of ourselves as separate from one another – separate bodies, separate professions, separate living quarters, separate ideologies, separate everything. Here I am, over here. There you are, over there. Pretty simple, eh?

But is this the truth?

So what is this centuries-old Hindu philosophy of Advaita, or more exactly Advaita Vedānta, that seems to take an opposite view? In Sanskrit, Advaita Vedanta means nondual or “not two.” Nondualism rejects the dualistic reality, the reality most of us perceive as real. Wikipedia reports “The Hindu concept of Advaita refers to the idea that all of the universe is one essential reality, and that all facets and aspects of the universe [are] ultimately an expression or appearance of that one reality.” This is also known as “oneness” or what some call “unity consciousness.”

Many people, including myself, have had the experience of oneness or nondualism where we feel like we are part of a giant whole, not separate or divided. But for me these experiences have usually been spontaneous and fleeting.

The idea that we are separate is compelling since there is massive collective agreement that it is real. First of all, walking around this world each day, it appears that we are separate; secondly, everyone I come in contact with believes the same thing – that we live in a separate reality of good and bad, you and me, we and they.

But is it true? Just because there is collective agreement that something is real, does that make it true? I wrote about the distinction between what is true and what is real in May (click here for link), because we often confuse the two. One of the insights I had was how almost anything believed is perceived as real by the believer; then most if not many of us make the leap of faith that real is also true – a huge assumption. For me, this was an unexamined assumption.

So let’s ask “What if?” What if the dualistic reality we experience every day is not the true reality? What if, as the nondual sages claim, this reality is a soap opera, a playhouse we live and sleep in something like “The Truman Show” (again, see my May editorial)? What if this reality were a dream state which, like in a dream, seems really real for the dreamer while she or he is asleep, but which makes no sense when awake.

What if the nondual reality of oneness was the true reality and there wasn’t any separation, no duality, and that we are all one? What if any perceived separation was what our egos did to make the soap opera more entertaining, more dramatic, more exciting?

So what does “all one” mean? To me, it means there are no boundaries separating seemingly distinct parts, so there is no here and there, you and me, we and them.  There is only “we” or “us.” Let’s look at this reality through nondual eyes.

The Human Body as a Model/Example

Biologist Bruce Lipton, godfather to the new science of epigenetics, writes about “multicellular communities” and points out that while they appear “as single entities to the naked eye – a mouse, a dog, a human – they are, in fact, highly organized associations of millions and trillions of cells.” (see Note #1)

What if the world, perhaps even the galaxy, is one giant multicellular community? Imagine each living thing is a cell and we all live within another giant cell called Earth. The membrane of the Earth is the stratosphere. Lipton calls the real brain of the cell its membrane.

We can choose to draw the boundary of any of these multicellular communities, as small or as large as we want. We can decide that each human body, each animal, each living thing is separate; or we can decide that the membranes that contain us all is larger than our skin, our planet or our galaxy.

We choose the way that we want to see it.

What We Know and What We Don’t

If we start with an individual living thing – say, a human being – how can we decide that only what goes on inside that person is pertinent to its function? Each human being is a whole multicellular community and has billions of communications and messages going on within that community. But each of us also have communications and impact of things outside of our bodies. There are the things that are experienced by our physical senses – words we speak, odors we emit, nutrients we take in, waste we evacuate, work we do, art we create and much more – but there are also the communications and messages we send and receive that are not available to our physical senses.

Our bodies are surrounded by electromagnetic fields that interact with fields of others. We send and receive messages that transcend the material world. People have reported hearing from loved ones long dead or thousands of miles away – messages that have transcended time and distance.

I recall hearing about ancient herders who never employed fences for their herds. Whenever they needed to get all their livestock together they would astro-travel over the various hills nearby, locate the strays and then set out to round them up knowing which direction to walk.

I’m reminded of innate skills that humans may have had back in the pre-medieval times that we still see in animals today. Is it unreasonable to think we once used those skills and could revive them if we wished to? I’m thinking of the elephants who broke loose and sought higher ground when they realized a tsunami was coming, or the dogs who start getting restless before an earthquake, or the salmon who remember what river to return to in order to lay their eggs before they die despite spending most of the lives thousands of miles away in the oceans.

And what about the dogs who come to wait at the front door when their masters leave their offices miles away. If their master meets a friend and decides to stop for a drink, the dog leaves its waiting spot and returns to where it was before in the home. (see Note #2)

We may have practiced these skills earlier in our evolution – perhaps we could again if we wished to. Could it be that between the Industrial Age and the collective fixation on the physical sciences these skills and sensitivities have atrophied? 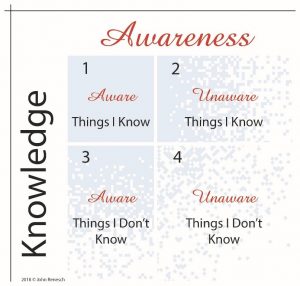 Whether you agree with this or not, perhaps you can agree that there is so much we are unaware of when it comes to what we really know. To emphasize this I created this graphic (right):

The upper left quadrant (#1) is the only one that has a finite border since it is the only one where all – if not most – of the content can be included. The other three cannot be filled completely (hence their vague borders) because we can never know all of what we don’t know nor can we be aware of everything that we are unaware of. We may have friends and family who know us well and help us come up with a few things but on our own it could be really hopeless.

Seeing this depiction might provide the reader with an insight as to how little we know, what we don’t know and how oblivious we are to that which we are unaware. Too often we think we know everything, as in Quadrant #1. The truth is we can know everything we know that we are aware of but, after that, we’re all pretty much out to lunch.

Holon is a term that grew out of the Greek word “holos” meaning complete in parts. It was introduced by Hungarian system thinker Arthur Koestler who meant it to mean something that has integrity in itself yet is part of a larger system. In other words it is a “subsystem” of a larger system, hence the cell, the human, the earth and the galaxy (below).

I have found it easier to find people who like the explanation that we are all connected, as in familial relationship if we go back in time far enough; but connected as in family is different than “all one,” as in cells within cells.

Note #2: Rupert Sheldrake has published various studies with videos showing that dogs can tell when their owners are coming home, even from large distances.