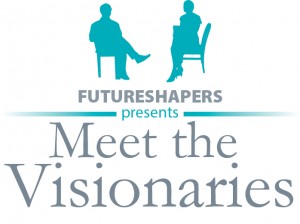 “Meet the Visionaries” was a series of public interviews on the first Tuesday evening each month in San Francisco at the Gladstone Institutes held between September 2015 and April of 2016. It also included two events – one with Lynne Twist and another with John Perkins (see below) – at The Battery, a private club in San Francisco.

John Renesch is a global futurist who has published 14 books and hundreds of articles of organizational and social transformation. He is the past Host of the Howard Thurman Forum (2007–2008) and The Presidio Dialogues (2000-2008). He is a co-founder of the International Spirit at Work Awards and a co-founder of FutureShapers LLC, sponsor of the “Meet the Visionaries” series. 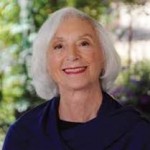 Barbara Marx Hubbard is the founder of The Foundation for Conscious Evolution. She is not an idealist, nor does she believe that social and planetary change is simple.  But she does believe that humanity has the tools, fortitude, and resolve to take the leap towards conscious evolution. Deepak Chopra MD called her “the voice for conscious evolution…” She is an evolutionary thinker who believes that global change happens when we work collectively and selflessly for the greater good, problems are evolutionary drivers, and crises precede transformation. 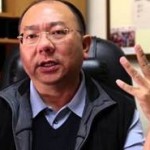 Sam Chan, President, Applied Computer Online Services – “The World’s Largest B2B Online Computer Store.” He is recognized and respected for his ability to achieve and maintain peak performance states, which has enabled him to build a consistently profitable business for the last 30 years. Sam has managed to balance a thriving business with a deep personal spiritual practice, devoting time to his Buddhist practice, his family and community service. 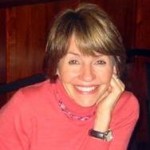 Lynne Twist, author, The Soul of Money, co-founder, The Pachamama Alliance. She has won numerous awards including the United Nations Woman of Distinction award, Humanitarian of the Year Award from Youth at Risk; Heroes of the 21st Century award from the Social Venture Network; Entrepreneurs’ Award from Katalysis Partnership; The Rainforest Champion Award from the Rainforest Actions Network; and the New Dimension Broadcaster Award. 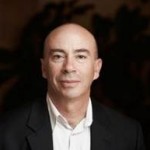 Marc Lesser: Co-founder and CEO, Search Inside Yourself Leadership Institute (SIYLI), which provides evidence-based practices to grow in self-mastery. Thousands of executives have been trained in meditation practices since SIYLI was formed just a few years ago. It’s about navigating our opportunities and challenges with more resilience, more engagement, and more happiness. He is the author of Less: Accomplish More by Doing Less and former director of Tassajara Zen Mountain Centre.

Diana Chapman is a cofounder of the Conscious Leadership Groups and co-author of The 15 Commitments of Conscious leadership. She has been a trusted advisor to over 700 organizational leaders and many of their teams. Clients from Genentech to Yahoo! value her clarity, compassion, ferocity and playfulness. A well-respected facilitator for the Young Presidents Organization, Diana works with forums and chapters worldwide. She invites leaders to the edge while igniting the courage to leap into the unknown, the space where a bigger game of life awaits. 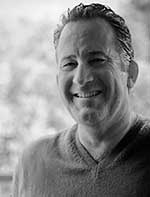 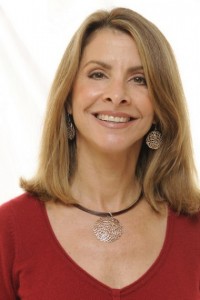 Susan Mayginnes is CEO of Commit to Greatness Consulting, She brings powerful transformational methods to organizations and their leaders for greater team performance and results. Formerly Co-Founder & Director of Training for The Summit Organization, a personal and professional development company graduating over 40,000 people from its innovative programs. Susan co-founded Summit at the age of 21 and built it to a $14 million dollar company in eight years. She has led CEO mastermind groups and worked with executive teams from a diverse portfolio of businesses for over 20 years. She addresses the challenge of growing businesses in ways that are beneficial to our own mental and physical well-being, effective in our work and our relationships with others, and good for the world at large. Susan believes that leaders must lead with greater wisdom, purpose, meaning and consciousness while bringing leadership practices together with knowledge of wisdom traditions and neuroscience. 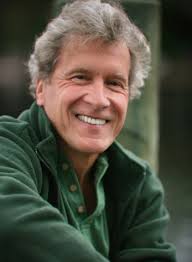 John Perkins served as a Peace Corps Volunteer in Ecuador from 1968 to 1970. He went on to advise the World Bank, United Nations, IMF, U.S. Treasury Department, Fortune 500 corporations, and leaders of countries in Africa, Asia, Latin America, and the Middle East as Chief Economist at a major international consulting firm. He writes about his experience doing this work in Confessions Of An Economic Hit Man a book that spent 73 weeks on the New York Times non-fiction bestseller list and has been translated into 32 languages. He is a founder and board member of Dream Change and The Pachamama Alliance, non-profit organizations devoted to establishing a world future that generations will want to inherit. He has lectured at Harvard, Oxford, and more than 50 other universities around the world, and is the author of books on indigenous cultures and transformation, including Shapeshifting, The World Is As You Dream It, Psychonavigation, Spirit Of The Shuar, and The Stress-Free Habit. He is an expert in shamanism and serves as a consciousness coach with FutureShapers, LLC. 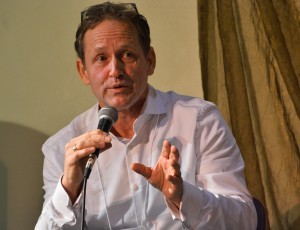 Bill Shireman is President and CEO of Future 500. He brings together forces that love to hate and demonize each other: Republicans and Democrats, Rush Limbaugh conservatives and Michael Moore progressives and giant global corporations and the activists that distrust and demonize them. Shireman united Coors, Safeway and the Sierra Club to design and pass California’s “bottle bill” recycling law. He united Mitsubishi and Rainforest Action Network (RAN) to work together to save rainforests from North America to Malaysia. He brought together Coca-Cola and Genocide Intervention Network to help promote peace in the Sudan. Now he is helping unite the interests of Charles Koch climate skeptics and Al Gore climate activists.