How Does Increased Consciousness Impact the Bottom Line?

Having been in the field of conscious leadership since before it had a name, even back in the 1970s when we were referring to it as “new paradigm business,” there were always pleas for metrics – some concrete way of seeing an improved bottom line as a result of personal change. Anecdotes seemed to fall short when it comes to convincing people that transformation would be an improvement to an organization’s culture and, most importantly, to its profitability.

The most skeptical people seem to be the ones whose responsibility it is to approve any changes in the culture, plus related expenditures for programs or consulting or coaching. Most of these skeptical people have privately told me that while they believe the changes would be valuable for the organization, they need metrics to back them up so they will not come across as mere idealists. They do not want to be invalidated by their superiors.

Search Inside Yourself Leadership Institute (aka “SIYLI,” pronounced “silly”) was started in 2007 by Google from one engineer’s dream to change the world. The engineer is Chade-Meng Tan (aka “Meng”) who wrote a book entitled Search Inside Yourself in 2012. Meng assembled leading experts in mindfulness, neuroscience and emotional intelligence to develop an internal course for his fellow Googlers. The institute became an independent nonprofit organization in 2012.

SIYLI has since trained tens of thousands of executives how to meditate and become more mindful not only at Google but at SAP and other organizations worldwide. They have also collected some data on the impact this training has had on people’s lives and their work. So now we have metrics!

One of the highest costs for any orgaization is health-related – insurance coverage, direct medical costs or employee time away from work due to illness. One of the leading causes of health problems is stress. Participants in SIYLI programs reported a huge reduction in stress, down to 24% after the program from 58% before. That’s over 50% reduction in stress!

The Chief Strategy Officer at Plantronics “highly recommends” their program to anyone “looking to improve the way their team works together, enhance their innovative thinking and clarity, reduce stress, improve general well-being, manage difficult conversations and be generally more at peace.”

One of the biggest metrics for the skeptics is how much improvement can be achieved in individual performance. In other words, will the investment of time and money in making this change help improve the organization’s profitability?

In this arena, participants reported a greater ability to focus and be more effective.

Performance increase from 36% before the training to 68% after. That’s almost double or 190% improvement!

People report being better able to focus, listen to others and, generally, having more rewarding interactions with customers, vendors and co-workers.

Finally, does leadership actually improve – become more conscious as I would say? Here is one of the most dramatic metrics that SIYLI reports.

Participants are better able to maintain calm and poise during challenges – to the tune of nearly three times more or 2.7X! They report an increase from 17% to 46%.

An executive at Proctor & Gamble strongly endorses the mindfulness program, highly recommending it “as part of any leadership development curriculum.” 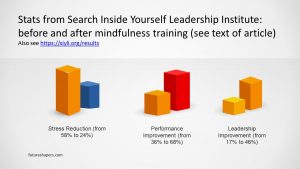 SIYLI strives to teach people tools for compassion, empathy and wisdom so that they can create a better world for themselves and others. They call their teachings “mindfulness training.” We call our FutureShapers work trainings in “conscious leadership.” Some assume that mindfulness and consciousness are synonymous. I disagree. Mindfulness is a form of awareness that allows people to meditate better and focus. Rather it is paying attention to what is happening in the present moment. OxfordDictionaries.com defines it as “the quality or state of being conscious or aware of something.”

Consciousness is who we are at our core – the shared essence of all that is, the source of our existence. It can also be considered synonymous with self-awareness. So while consciousness and mindfulness may not be completely synonymous, they are closely related – “kissing cousins” so-to-speak.

With this distinction in mind, I assert that the metrics and the endorsements provided by SIYLI can be equally applied to conscious leadership training (such as we do at FutureShapers) as they are to mindfulness training. Both trainings help people become more self-aware, more serene and calm, more compassionate and better able to be present.