Lynne Twist: A Profile in Integrity 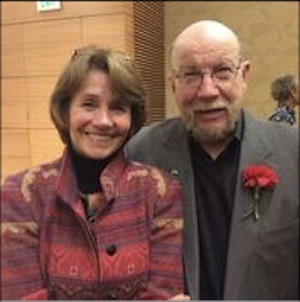 Lynne Twist with John at Meet the Visionaries event in 2016

I first met Lynne Twist in 1975 while we were both associated with a San Francisco-based human potential organization called EST (the predecessor to what is known today as The Landmark Forum) – she as a volunteer and me as a short-term contractor. Shortly after she became one of the small startup staff for The Hunger Project where, in collaboration with another colleague, I helped deliver a training process for critical path planning.

Over the years, our paths crossed again and again until she co-founded The Pachamama Alliance (“TPA”) over 22 years ago. Throughout that time, I have been a supporter of TPA which has given me many more opportunities to be with Lynne.

While I have admired Lynne enormously, I have not seen her as having a focus on conscious leadership, the field I have been immersed in for much of the last half century. But in a recent interview of Lynne in Conscious Company Magazine, she shares quite a bit about the subject and I wanted to share her wisdom with my FutureShapers community.

Here is what she says after being asked how she holds her responsibility as a conscious leader:

I don’t consider that I have what you might call a private space to be grumpy or ornery. I don’t think I have that right, and I love that about being a conscious or committed leader. I love that the scope of my leadership encompasses my personal life.

We all have the opportunity, the privilege, the responsibility to give our best to life.  Someone who is committed to an environmentally sustainable, spiritually fulfilling, socially just human presence on this planet can’t indulge themselves in taking things personally.

I have added the italics in the above paragraph since Lynne paraphrased the mission of TPA, a mission I have found so powerful that I have adapted it into my own personal mission statement.

She then shares how much easier it is for her to let go of any discomfort about having taken on this responsibility because “I’m standing in a place that’s so much bigger than my own personality, identity, wants, or desires.  It’s so unproductive.  It’s unproductive for anyone, but if you have a big commitment, it’s super unproductive.”

One last thing I would like to say about Lynne: Many women leaders I am aware of (those I know personally and those I know of through the media) seem to largely rely on their masculine side, thus diminishing their feminine side. In all the years I have known Lynne she has never forsaken her femininity. This is a key part of maintaining one’s integrity – being a person who is whole and integrated, bringing their whole selves to their work, their relationships and their lives.