Navigating the States of Consciousness

Throughout the world, nations, organizations, families and individuals are reacting to the seemingly ever-increasing pace of change. Shifts in demographics and a rapid increase in technological advances is resulting in the collapse of the social systems previously designed and implemented throughout our societies, organizations and lives. These systems—including education, healthcare, energy, transportation, communication, and governance —were designed when we had a fraction of the global population and we were living in agrarian and industrial times. As we know, change can be positive or negative, subtle or severe, real or perceived, minor or major. The way we respond to change can be exhilarating, stimulating, motivating, and desirable or it can result in stress. Stress is our brain’s response to stimuli.

To be able to absorb change and not succumb to the negative aspects of stress requires a stable mind. Achieving a stable mind can be accomplished through any number of contemplative practices and is a key component of being a conscious leader.

Models can also prove useful in helping leaders to navigate change, helping them identify where they are and where they aspire to be. Several models have been developed by a variety of thinkers, citing various levels of consciousness. 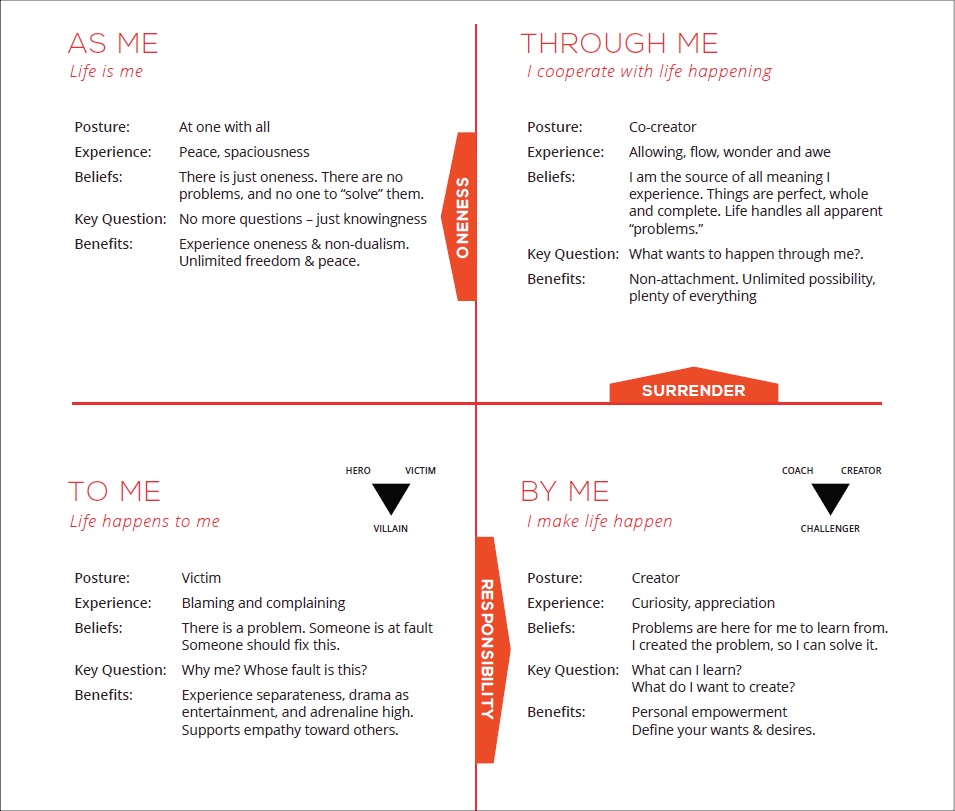 One such model is from the Barrett Values Centre – “Seven Levels of Consciousness” – developed by Richard Barrett. Another model that we have found to be particularly effective is based on the work of several people, as opposed to having a single author. This model shows four levels or states and depicts the levels in quadrants, starting in the lower left, moving counterclockwise and reaching the highest level in the upper left quadrant. Helen Attridge of the Academy for Leadership Coaching NLP is one who has contributed to this model. Motivational theorist Abraham Maslow certainly influenced others who have added their fingerprints to it as it has evolved.

The Conscious Leadership Group (CLG) has expanded upon the quadrant model and labeled their version – “The Four Ways of Leading in the World” (see the graphic above). The CLG principals – Diana Chapman, Jim Dethmer and Kaley Warner Klemp – estimate 97% of people spend 90% of their time in the lower two quadrants.  They have developed the jargon of operating from a place “above the line” versus “below the line” meaning someone is in the lower two quadrants (below the line) or the upper two (above the line). Being below the line means one is operating out of fear or mistrust; being above the line means one is operating from a context of love or trust. The CLG principals have popularized these phrases in their book – The 15 Commitments of Conscious Leadership – which includes the graphic on the book’s cover (see cover on the right).

We have integrated these various model characteristics and added our own elaborations here:

In the First State of consciousness, life is experienced from a place of “life happens to me.” Reacting to external forces and personal history from a place of feeling a lack of control, this level of consciousness is experienced as a place of victimhood; there is no sense of personal responsibility for one’s reality. This is often accompanied by thoughts that someone else is at fault or to blame for one’s circumstances. Life is lived in scarcity; never experiencing enough of anything.

Leadership, from this place can be experienced as a burden and thoughts that followers are incompetent. Other characteristics can include happiness as a fleeting moment, a sense of never enough time and lacking a sense of purpose.

In the Second State of consciousness,life is experienced from a place of “life happens by me.” In opposition to the First State, reacting to external forces and personal history from a place of feeling in control, this level of consciousness is experienced as a place of ego; there is a false sense of complete control of one’s life. Life is lived from a feeling of personal empowerment, even appreciation and curiosity; a prevailing belief that we create our own reality. Problems are something one creates so they exist to be solved.

Leadership from this position is about skills to be mastered. Other characteristics can include happiness and purpose as choices to be decided and created.

Leadership is experienced as leading whenever the opportunity presents itself and there is a need for someone to step up. Other characteristics can include happiness as ever-present; life is lived in the present moment.

In the Fourth State of consciousness, life is experienced from a place of “life happens as me.” This state is often described as “being one with everything” or a place of unity. It is the place of non-dualism, where all sentient beings, including Mother Earth, are experienced as a part of oneself. While there may be preferences there are no attachments.

Leadership is experienced as shared, understood and self-directed. Other characteristics can include more awareness of energetic vibrations than moods or thinking states. Serenity prevails.

In creating the FutureShapers model, we modified the quadrant graphic, changing it to a pyramid and tweaking it in a few other places. Below is the slide we now use in our certification trainings for Roundtable Hosts and Consciousness Coaches.

Transitions or “give-ups” between levels are marked by the red arrows. 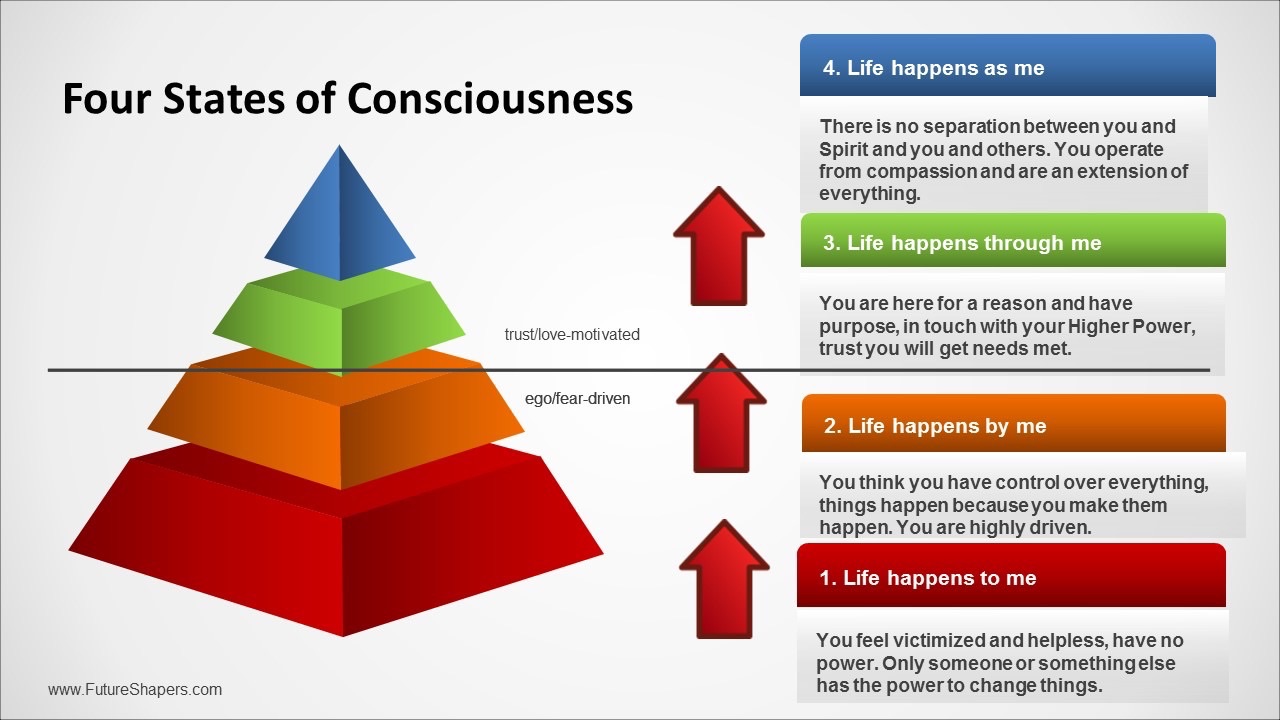 In working with the model, it becomes clear that to move through the states requires shifts in reality (how one sees and experiences the world) as well as a re-writing of our personal stories (what we tell ourselves about the way things are). It is only through this process of letting go of our stories that we can avoid having our states of consciousness being driven by external forces.

Navigating From State to State:

Once there is a basic understanding of the four states of consciousness one might wonder where one is at any time and how to navigate from state to state. If you are committed to being as conscious as you are able, you will likely be doing self-assessments throughout your life, recognizing that we visit different states at different times. There is no inherently “good” state or “bad” state although we may have strong preferences for a particular state.

To transition from State One, the place of the victim where “Life happens to me,” requires taking responsibility and giving up blame to move into State Two, the “Life happens by me” state. Blame is the ego’s way of dodging personal responsibility, taking solace in believing that one’s circumstances are someone else’s fault.

To make the transition from State Two to State Three requires giving up the idea of being in control. This involves surrendering to something greater than oneself. The mind wants to think it is always in control so the negative ego provides this experience, even if it is made up. The value of surrender cannot be over-emphasized.

Making these transitions moves us from the fear-based and negative ego-based States One and Two up to the trust-based upper states (States Three and Four). Said another way, we move from “below the line” to “above the line.” We define negative ego as the shadow side of ego.

Many people who feel quite conscious and “in the flow” with life – such as many conscious leaders – spend the majority of their time in State Three.

If you aspire to further evolve and experience oneness, that space of unity that mystics write about, represented by State Four – “Life happens as me” – you need to give up the idea of separateness – the belief that you are separate from other people and accept oneness or Unity Consciousness. This goes beyond feeling simply connected, since connected can still imply separateness, not unity. In State Four, one no longer experiences reality as a duality – either/or, right/wrong, questions/answers. Pure knowingness, freedom and peace prevail in this non-dual realm.

Again, it is important to note that we humans move about, from state to state, often within minutes or hours, visiting several states throughout the day. We might be basking in the sense of oneness with everything (State Four) when a loved one is injured or a precious item falls off a shelf and breaks and suddenly we can start thinking like a victim (State One).

As conscious leaders it becomes critical to develop a stable mind to ensure the majority of life is experienced from the upper states. In doing so, leadership effectiveness increases dramatically resulting in reduced stress and more openness to change for the leader as well as others in the organization.

Whether you envision there are four states of consciousness or seven levels or three steps, the point is that while consciousness is difficult to define there are degrees of “awakeness.” One can be asleep (and there are numerous levels of sleep as we know), half-awake, awake or fully alert. Being human means we all visit some of those states at various times even though we may aspire to be fully awake or at least alert most of the time. Our goal is to be as conscious as we can while we are awake, knowing that this state of awareness may not be available to us all day long.

About the authors: John Renesch is a futurist who has published 14 books and hundreds of articles on social and organizational transformation and is co-founder of FutureShapers LLC. Thomas Eddington is an executive coach and consultant, a former partner in Hewett Associates and CEO of FutureShapers LLC.