The Nondual and Dualistic Jitterbug 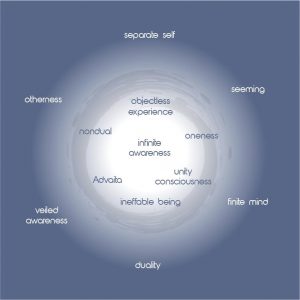 Studying the philosophy of unity conscious, what the ancient Hindus called Adavita* or what many modern sages call “nondual,” I have noticed a shortage of graphical depictions that might be helpful for people who are visual learners. As a result, I created a graphic in an attempt to describe and distinguish the two realms – nondual and dual. It could be seen as a map (at right) showing how awareness veils itself as the finite mind, in a disguise or costume.

The center of the diagram, largely white, represents this infinite awareness space in all its various labels. The darker areas surrounding the center depict the outlying areas where awareness or knowing or consciousness sees itself as a separate self – separate from “others” – thus living in duality, an artificial state of separation.

In this make-believe realm we take on certain roles like in a stage play, learning our lines and rehearsing our movements as any accomplished actor does. This separatist paradigm is very useful in everyday living and working, seeing people as separate, as other, as “not me.” It is useful in identifying competitors, keeping score in sports, having conversations, and going on dates.

Franciscan mystic Richard Rohr writes, “We do need the dualistic mind to function in practical life, however, and to do our work as a teacher, a nurse, a scientist, or an engineer. It’s helpful and fully necessary as far as it goes, but it just doesn’t go far enough. The dualistic mind cannot process things like infinity, mystery, God, grace, suffering, sexuality, death, or love; this is exactly why most people stumble over these very issues. The dualistic mind pulls everything down into some kind of tit-for-tat system of false choices and too-simple contraries…”**

We have developed quite a few habits in how we engage our finite minds. It is as if we allow our attention to wander, sometimes aimlessly, often strategically and with purpose. Remember that old response to when we got caught daydreaming or being somewhere in our thoughts besides where we actually were? And we’d say, “Sorry, my mind wandered off.”

When we are in that place of infinite awareness, where there is no object or focus of our attention, we are pure being. When our awareness is veiled or attracted to something to do, somewhere to go, or some way to be we slip into the dualistic realm. We now have attention on something, someone, or some place. We are indulging thoughts, sensations, or things in the world that seem separate from us, as in “otherness.”

Examples of these wanderings include thinking about what we are doing: like driving a car, performing surgery, eating a meal, having a conversation. Other examples include planning a project, worrying about anything, reading a book, or watching a movie.

When engaged in these activities we have taken on the role of the doer, the thinker, the observer. We have placed ourselves as the subject of an objective experience – a dualistic, make believe soap opera.

Referring back to the graphic, we have adventured out to the border of the diagram where we allow our awareness to focus on whatever wanderings our minds have conjured up for us.

I’m reminded of bungee cords or elastic straps as a metaphor for this attention that stretches out from our core awareness as we allow ourselves to be attracted to something. In meditation, this tension is palpable to the experienced practitioner. When the mind is silent there is a sense of absolute serenity, stillness and calm. When the mind gloms onto a thought of any kind, one can feel the disruption, the disturbance of the stillness. Subtle as it may be, this experience can serve as a prompt to bring us back to the pure beingness, the oneness and unity consciousness. 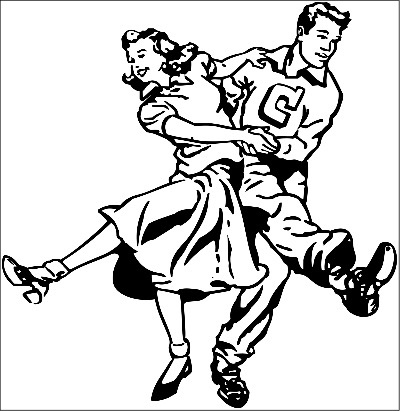 At first these two different realms – the dualistic and nondual – seemed contradictory to me, la conundrum or paradox. But now I see them as a dance, where we flow in and out of one to the other and back again. I liken this dance to the jitterbug, a popular, exuberant swing dance from the days of World War II (see drawing at right).

Much of the dancing is together, with the partners in constant contact, but some of the time they separate and move independently although still in sync. Together as one or separate, they work together.

*In Sanskrit, Advaita means “not two.”