We Are All Outlaws

MIT senior lecturer Peter Senge reminds us that when you live outside the law you are an outlaw. And…we humans are living outside the laws of Nature, as we are pillaging virgin forests, overfishing and destroying coral and critical habitat that leads to extinction of many species, amongst other things. This makes us all outlaws does it not?

Senge has authored several books, including The Fifth Discipline: The Art & Practice of the Learning Organization and Presence: Human Purpose & the Field of the Future. The Journal of Business Strategy named him as having the greatest influence on business strategy over the last century. Business Week and The Financial Times have honored him as one of the world’s “top management gurus.” He is also founding chair of the Society for Organizational Learning.

One of the most famous outlaws in the U.S.A. was Jesse James, back in the early 19th Century. For Americans, the James’ gang  is probably the quintessential image for outlaws, having been the fodder for hundreds of movies, books and stories that make them legendary. “Bonnie and Clyde” were another pair of outlaws made famous a few generations later, but they used cars rather than horses like the James’ gang did. 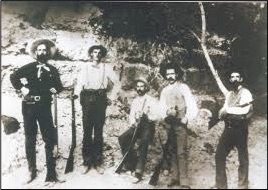 In today’s era, there is a different kind of outlaw – one that doesn’t use guns or getaway cars. This is the outlaw Senge was talking about. This gang of outlaws uses legal/political maneuvering to get what it wants and the “gang” is much of humanity. We are using human-made laws (regulations, legislation, tax codes) to break Nature’s laws.

During the closing of an interview with “Leading Conversations” host Cheryl Esposito, in addressing the issue of our being Nature’s outlaws, Senge said, “There is no waste in Nature and we humans generate lots of waste.” Here’s a link to a podcast of the entire interview: https://www.voiceamerica.com/episode/97816/encore-to-become-a-leader-you-must-first-become-a-human-being

I’m reminded of something the late business visionary Ray Anderson  wrote in his book – Mid-Course Correction: Toward a Sustainable Enterprise: The Interface Model – where he admitted to being a thief, albeit a “legal thief,” because his company had been so harmful to the Earth.

Anderson (1934-2011) founded and ran Interface, Inc., a modular carpet manufacturer whose factories were petrochemical nightmares on the environment. At the time, Interface had sales in 110 countries and manufacturing facilities on four continents. His commitment was to have Interface reverse that trend and ultimately have no negative impact on Nature.

You could say that Anderson recognized that he had been an outlaw (a legal one according to human-made laws) and sought to make restitution to the laws of Nature.